Those who know me well may look at the title of this post and think of Brent Spiner. Actually, I'm paraphrasing Samuel Taylor Coleridge's "Rime of the Ancient Mariner". It's cheesy, but does capture the challenges about getting access to the data we need in our project to provide early detection and situational awareness of threats to health. 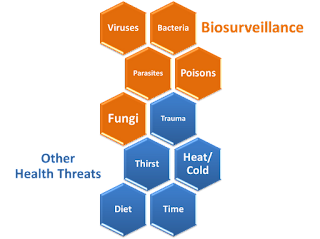 But before we can get there, let's raise a happy topic--death. Or more properly, what sickens and kills us. All mortals die, and so must all of us one day. We hope to delay that and hope further to delay the illness that may be the proximate cause of our demise. So, I've listed the things that can kill us in the figure to the right.


Most of these are easily accepted as contributors of threats to our health. "Time" may take a bit more explanation since it refers to the natural decay of our DNA as "errors" creep in over time when they replicate, causing all sorts of problems. In a general sense, this phenomenon is in line with the thermodynamic notion of entropy, where the state of order in a system declines over time. (When my daughters were children, I often joked that the entropy in them was strong. Mysteriously, they never laughed.)

The first five on the list are colored orange because they are of interest to us in our biosurveillance mission. The others are still in play, but outside our reference frame. We seek to detect the effects of these agents that may naturally cause or intentionally be used to cause illness and death. There are many places to look for them in data, but we might consider a variety of sentinels and contexts. These include the following:
The five agents of illness and death are in play in the biosphere in the above sentinels as containers of pathogens or toxins, incubators supporting their growth, or vectors allowing them to spread. Each sentinel category could be considered as data awaiting collection. Our society generates data associated with each of these every day, all the time.

The question is how we can gain access to those data and turn them into information. More on that in the next post.
Posted by Dave Potenziani